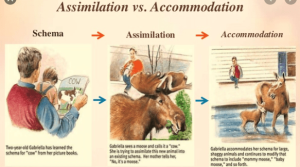 According to the constructivist model of the psyche, also known as the Theory of cognitive development, proposed by the Swiss Jean Piaget, there are two fundamental concepts for the acquisition of knowledge in man, which are assimilation and accommodation.

See also: Board games for kids

See also: Examples of Behaviorism in the Classroom