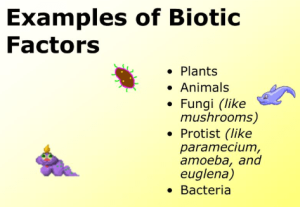 On the other hand, the relationship between organisms in an ecosystem is also called an abiotic factor. These relationships condition the existence of all the inhabitants of the ecosystem, since they modify their behaviors, their way of feeding and reproducing, and in general the conditions necessary to survive.

In the ecosystem there are also abiotic factors, which are those that also condition the existence of living beings, but that are not living beings, such as water, heat, light, etc.

Biotic factors are classified into :

Producers are those organisms that produce their own food. They are also called autotrophs.

Consuming organisms are those that cannot produce their own food. This includes herbivores, carnivores, and omnivores.

The decomposers feed on organic matter, breaking it down into its basic elements.

Difference between Gastritis and ulcer

Types of Plant Tissues and Their Functions

Difference between Osmosis and dialysis