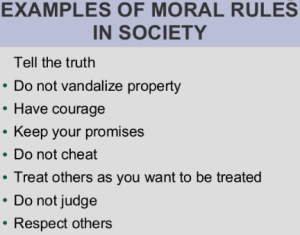 Examples of Morality is are given here. Click here to learn detailed examples of morality.

Different types of norms are emerging within every society, and these tend to govern people’s behavior, even when they are not always aware of it.

Where do they come from?

Moral norms are derived from certain ethical values that emerge from within society, and although these are not always the same, they tend to be understood from a certain perspective linked to the concepts of fairness and justice: a pillar that supports many of the moral norms it is that principle that one should treat one’s neighbor in the same way that one would like to be treated by others.

Many philosophers considered questions about this behavior of the human being and of morality, standing out Aristotle and Immanuel Kant, who proposed a categorical imperative that can be interpreted similarly to the latter: ‘ Work only in such a way that you can wish that the maxim of your action becomes a universal law. ‘

However, not all societies admit that moral standards are limited to not taking actions that we would not like to do. Although the Western world is generally governed by these principles, in certain parts of the world it is considered that morality should be subject to the designs of God, and therefore, not only the offense to other people should be considered, but also the offenses towards God.

From there, certain additional moral limitations arise, which could be interpreted as interference with individual liberties. It is for this reason that the law can in no way fail to take into account moral standards when considering its decisions and verdicts. The absence of concrete penalties for those who transgress moral norms does not mean in any way that the transgression has no social consequences.

Top Board games for kids