Those programs that are created in order to harm computers are known as viruses.

Common Types of computer viruses are: 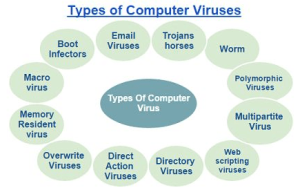 Viruses act without the consent or knowledge of users, and what they do is modify the operation of the machines, erase, ruin or steal information, consume memory, among other actions.

According to the damage they cause to computers, there are the following types of viruses:

Worm or computer worm: it is a malware that resides in the computer memory and is characterized by duplicating itself in it, without the assistance of a user. They consume broadband or system memory to a great extent.

Trojan Horse: This virus hides in a legitimate program that, when executed, begins to damage the computer. It affects the security of the PC, leaving it defenseless and also captures data that it sends to other sites, such as passwords. Logical or time bombs: they are activated after a specific event, such as with the combination of certain keys or on a specific date. If this fact does not occur, the virus will remain hidden.

Hoax: They lack the ability to reproduce on their own and are not true viruses. They are messages whose content is not true and that encourage users to forward them to their contacts. The objective of these false viruses is to overload the flow of information through e-mail and networks. Those e-mails that talk about the existence of new viruses or the disappearance of someone usually belong to this type of message.

Link: These viruses change the addresses with which the computer files are accessed by the one where they reside. What they cause is the inability to locate the stored files.

Overwriting: this class of virus causes the content of the files it attacks to be lost. This is achieved by overwriting its interior.

Resident: this virus remains in the memory and from there they wait for the user to execute a file or program in order to infect it.

Certain viruses have the ability to mutate on their own, modifying their own code, in order to avoid being detected by antivirus. On the other hand, we find retro-viruses, which are viruses whose attack technique is to cancel any antivirus installed on the computer.

Other characteristics of viruses include silent activity, resistance to formatting and integrated work.

Some computer viruses can take many forms. Certain varieties are characterized by their ability to transform their code, and precisely because they are polymorphic (also called mutants) they are much more difficult to detect and eliminate .

Stealth or stealth viruses attach themselves to certain files on your computer, quickly attacking and spreading throughout your computer. They have a great ability to camouflage themselves and not be discovered.

Certain viruses can attract others, making their activity more lethal . They will even assist in hiding and assist in contaminating a specific unit of the device.

Certain computer viruses can conceal the changes they make inside the computer , that is, the system will not show signs of virus infiltration. This feature can make detection even more difficult.

In a few cases, computer viruses can remain on the system even if the hard drive has been formatted . This type of virus is characterized by having the ability to infect very specific portions of the computer, either in the CMOS or lodged in the MBR (main boot record).

Chameleons are a variety similar to Trojans. They pretend to be commercial programs that the user usually trusts, but the reality is that their objective and function is to cause some type of damage to the computer.

Retro-viruses, also known as virus-antivirus, use as an attack technique the cancellation of the antivirus programs that are running on the computer. Consequently, the computer is defenseless and exposed to other attacks.

Some computer viruses modify their own code to evade the action of antivirus, creating alterations of themselves in each copy.

Types of software with examples and applications

Difference between RAM and ROM