To every action, there is always an equal and opposite reaction. 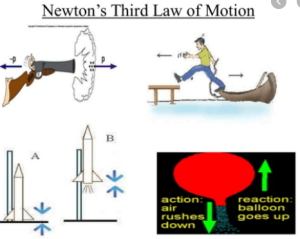 Forces acting on the body

a) The force of gravity acting downward which we call the weight of the book.
b) The other force is the push of the table on the book in the upward direction
These two forces are equal and opposite to keep the book in its stationary condition
Example (Rocket)
In the engine of a rocket, gases due to combustion rush out with great speed through jet on the backside of the rocket and as a reaction, the rocket moves in the upward direction
It is clear that action and reaction always occur together as a pair and act on different bodies.

Difference Between Work And Power in tabular form

Difference between Mass and volume in tabular form

Difference Between Kinetic Energy And Potential Energy in tabular form