The difference between prokaryotic and eukaryotic cells is that eukaryotic organisms have a nucleus surrounded by a membrane, whereas prokaryotes do not. 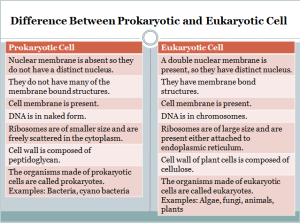 In prokaryotes, DNA is found in a region of the cytoplasm, called the nucleoid, unlike in the eukaryotic cell, where genetic information is found in the nucleus.

The cell is the basic and indispensable unit present in every living being. It is the smallest element alive. The three vital functions of every organism (nutrition, reproduction, relationship) are carried out by all the cells that compose it.

Depending on their structure, cells can be:

Similarities Between Prokaryotic and Eukaryotic Cells

While prokaryotic and eukaryotic cells are different in many ways, they also exhibit certain similarities. Both contain genetic material, that is, DNA. They have a cell membrane that covers them. Their basic chemical structures are similar, both being made up of carbohydrates, proteins, nucleic acid, minerals, fats, and vitamins.

Both prokaryotic and eukaryotic cells contain ribosomes, which make proteins. The two types of cells regulate the flow of nutrients and waste matter into and out of cells. They also reproduce, although in different ways. They need the energy to survive, they contain cytoplasm inside cells and a cytoskeleton. Both classes of cells have a lipid bilayer, known as the plasma membrane, that forms the boundary between the inner and outer sides of the cell.

Difference between Prokaryotes and Eukaryotes

But what are these differences? In the following lines, we explain them to you.

While eukaryotic cells have a well-defined nucleus, prokaryotes do not. Genetic information is stored within the nucleus of eukaryotes.

6. Composition of the plasma membrane

In prokaryotic cells the plasma membrane is composed of peptidoglycan or murein. In the case of eukaryotes, it is made up of phospholipids.

Difference between Reflection and Reaction

Difference between fetus and embryo

Difference between Genetic and Congenital in tabular form

Main Phases of Mitosis with Examples