What are the characteristics of life?

10 characteristics of living things or life are:

Now we learn in detail about these main characteristics of life.

If you observe the animals around you, you will notice that they all have to feed. They must feed in order to survive, to grow, and to carry out their daily activities. Do plants need food? If so, what do plants feed on?

Though plants have no organs of ingestion such as the mouth, they do take in water and mineral salts from the soil. Their leaves absorb carbon dioxide from the air. You can take away certain necessary minerals or nutrients from the soil and you will notice that the plants do not grow as well and would eventually die. Green plants take in the raw materials to make their own food. Non-green plants take in organic food substances.

This is the release of energy by the breakdown of food substances like glucose in all living cells.

Every organism requires energy to perform its vital activities such as growth and movement. Green plants derive their energy from sunlight by means of photosynthesis. Animals obtain theirs from the complex organic food they feed on. In both plants and animals, organic food substances, especially carbohydrates and fats, store up energy. This energy is set free when they are broken down by oxidation into simpler substances such as carbon dioxide and water. This process is called Respiration.

Excretion is the removal of metabolic waste products that have been produced as a result of processes occurring inside the cells of an organism. Carbon dioxide, for example, is a waste product of respiration. It is excreted from your body through your lungs.

There are numerous chemical reactions occurring in the cells of an organism. These are metabolic reactions. Some of these reactions produce substances that are unless to the organism or may even be harmful. Hence they must be eliminated. The process by which the organism removes such metabolic waste substances is called excretion.

Living organisms are open systems continually receiving and disposing of both energy and materials. This process is basic to their continued existence. If it stops or breaks down, the organism dies.

The growth of an organism involves the addition of more body substances. For example, you started off life as a single cell less than 1mm in diameter. Now, you are a large organism made up of billions of different types of cells.

Growth is a permanent increase in the mass and volume of an organism as a result of converting absorbed food into living protoplasm. Some of the new living materials formed are used to repair worn-out parts of the cells, the rest is added to the original living matter to bring about an increase in size. This may make the organism more complex or even change its form, e.g. a seed germinates into a seedling and grows into a mature plant. The egg of a butterfly hatches into a caterpillar, grows, and changes into a pupa and finally emerges as an adult insect. The body form of an organism can change and get bigger, becoming more complex. This kind of growth is characteristic of most living organisms. We say most because some parasites actually become simpler in the structure during the later phase of growth.

Non-lining matter such as a bicycle does not grow. However, a crystal immersed in a saturated solution may increase in size.

Movement is a characteristic of organisms. It is more easily detected in most animals than in plants. The movement of an organism is independent of external agents such as the wind or water currents. Most animals are able to move from one place to another. Such a movement is called locomotion.

The movement of organisms from one point to another in a directed and controlled way is called locomotion.

Some animals do not have the power of locomotion, for example, corals and sponges. They are fixed to one place, but they can still move parts of their bodies. Most plants are unable to carry out locomotion but slow movements of their body parts are always taking place, e.g. the flowers of plants slowly open and shoot bend towards the light as they grow. Some microscopic water organisms, e.g. Euglena, are able to move freely from place to place, resembling animals in this respect.

Living organisms are able to detect and respond to changes in their environment. This is called sensitivity. The organism detects a stimulus from the environment and produces a response to that stimulus.

Animals and plants are sensitive to any changes in the immediate surroundings. They often react to these changes in a way beneficial to themselves. For instance, cockroaches forage in a dark room but will find cover immediately when the light is turned on.

If you smell something unpleasant or touch something very hot, you immediately move from it. When the sensitive plant Mimosa pudica (touch-me-not) is touched, its leaves automatically fold up.

When a potted green plant is placed in a closed box the shoot grows vertically upwards. However, when light is allowed to enter through a hole made on one side of the shoots grow towards the light.

This property of living organisms that result in an appropriate response to a stimulus is termed sensitivity or irritability.

All living organisms are able to reproduce their own kind. In this way, the species lives on through individuals die. Individuals are never immortal. They die of disease or old age, in accidents, or are eaten by other organisms. Thus, reproduction is necessary for the species to survive.

Living organisms are able to adjust and adapt themselves to changes in their environment. This adaptability increases their chances of survival and the perpetuation of their own species.

For instance, a change of seasons or a shortage of food may cause certain birds to migrate to another place where the conditions are more favorable. To get enough sunlight, a plant may grow very straight and tall to be above the plants around it. Non-living things do not show this adaptive response.

An adaptation is any characteristic of an organism that, in the environment in which they are living, improves their chances of survival and so enables them to leave behind offspring. For example, fish that are more streamlined are better adapted to life in livers than fish which are not.

Some of the characteristics of living organisms given above can be found in certain non-living things.

For example, a motorcar can move and give off wastes products when its fuel is burnt. It is also a well-organized and complex structure. Indeed men have often used machines as models to help them understand how living organisms work. But machines do not produce themselves and do not grow. Thus all these characteristics must be considered in distinguishing a living organism from non-living matter.

Differences between the Endocrine and Exocrine Gland

Difference between Anabolism and Catabolism 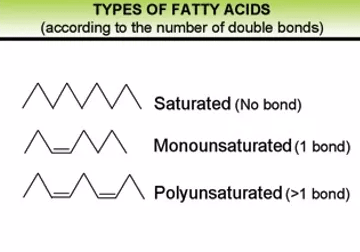 Types of fatty acids with Examples and Fuctions