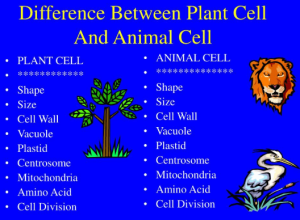 Difference between Plant and Animal cell

It has a defined nucleus and complex DNA. It is in charge of vital and essential functions for life, its nutrition, and its reproduction. This is characterized by being the smallest unit that performs all the necessary functions to maintain the proper functioning of organisms. The animal cell has a nucleus that in turn contains the nucleolus, where the ribosomes and most of the genetic material in the form of chromosomes are generated. These are some of the many functions of the animal cell:

Like the animal cell, it has a defined nucleus. The plant cell is part of the plant kingdom. It is autotrophic (it produces its own food). Plant cells are characterized by having chloroplasts, organelles that carry out photosynthesis, a process where the energy of the Sun is transformed into chemical energy, in order to create their own food. Also Read: Structure of Animal cell

Similarities between plant and animal cells

Types of Living Organisms on the Basis of Mode of Nutrition

Types of Osmosis with Examples

Difference between Gland and hormone

Difference between slug and snail